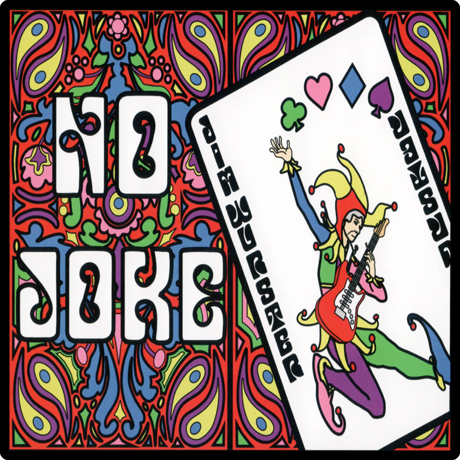 Available now on:
Update Required To play the media you will need to either update your browser to a recent version or update your Flash plugin.

Created, produced, and supported by homegrown Florida talent, Jim Wurster’s 16th album of original music, “No Joke,” mines the territory that has become familiar to his American and European fans. Government gone astray, love- both dark and seductive, and lives lost too soon, are topics that have dominated his prolific songwriting career. While his signature vocals croon of passion, hurt, and resolve, his words describe his struggle to make sense of it all.

Wurster’s new studio album, ‘No Joke,’ was the result of musician Vinnie Fontana’s long time admiration for Jim as an original artist and the contributions of accomplished SOFL musicians, vocalists, producers, artists, and photographers. Fontana had known Jim since the beginning of Wurster’s distinguished song-writing career, “I was always interested in listening to Jim’s music and realized what a great songwriter he was, so I asked him if he would be willing to have me produce some tracks for him. After I listened to the raw versions of the songs I tried to imagine who would be the right players.” Vinnie, a renowned blues and rock player in his own right, brought in virtuoso musicians like guitarist Jimi Fiano, and drummer Guido Marciano (who also engineered many of the songs). “The three of us have worked in recording together for over 45 years.” Along with the three longtime friends, Atomic Cowboys member Bob Wlos and Frank Binger, Black Janet member, George Zhen, and a host of other musical wizards rounded out the guests players. Jim’s ethereal sound is represented by vocalists Karen Feldner, Trish Sheldon, Daphna Rose, Alyssa McDowell and Omine. Not only was the album a SOFL musician extravaganza, but the artwork (Nicole Arrieta), photography (Teejay Smith, Robert Stolpe), additional recording (Phil Bithel), and mastering (Adam Matza’s Magic Ear) were all done by Florida talent.